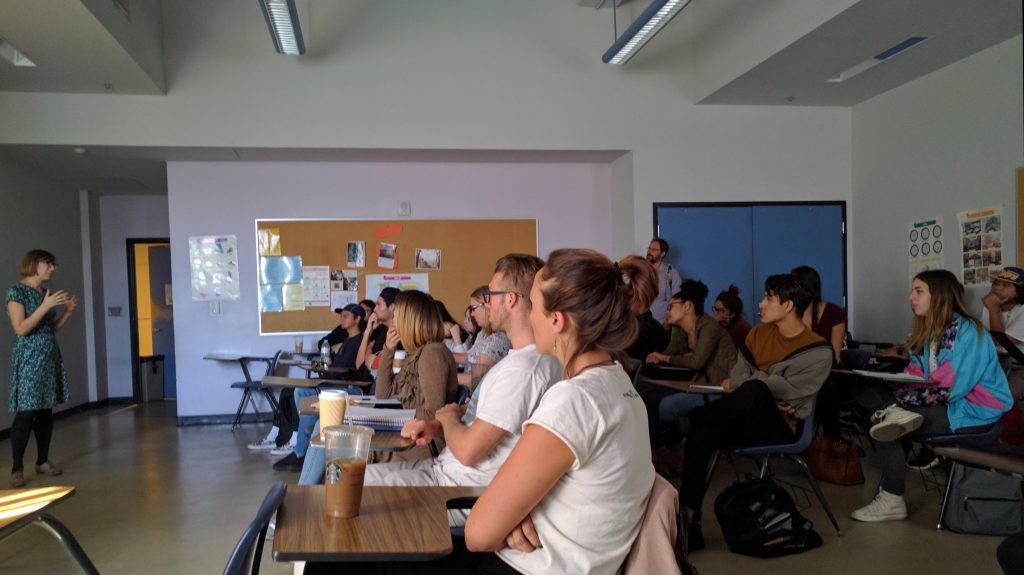 Imagine for the next few months being woken up at 3 am every morning, coaxing your body to lumber in the darkness through dense forest populated with hundreds of species of stinging insects, as the rising humidity suffocates your every breath. You’d have to be crazy to sign up for this version of hell; either that or a UCLA graduate student!

One such student is SMC alumna, Kotrina Kajokaite. She and her fellow researchers follow this routine at the Lomas de Barbudal Biological Reserve Biological Reserve in Costa Rica for up to eight months at a time. Their goal is to better understand one of the most intelligent animals on the planet—the capuchin monkey.

Kotrina returned to her alma mater today to inspire the primatologists of tomorrow, who are studying Physical Anthropology at SMC. Originally from Lithuania, she moved to LA in 2006 and began classes at SMC in 2007. She encountered struggles familiar to many of our students, including balancing work with academic life and honing her English language skills.

Kotrina has always loved primates and her passion was cemented upon taking a physical anthropology at SMC taught by Professor Janice Austin. She transferred to UCLA to complete her undergrad before beginning her graduate work under the guidance of Professor Susan Perry, the director of the Lomas de Barbudal Biological Reserve Monkey Project.

Kotrina develops models of capuchin monkey behavior and decision making as part of her PhD research, which help us better understand their dispersal patterns, coalitionary aggression and social relationships. In order to collect data and develop her models, she goes into the field for up to 13 hour at a time, recording countless observations in her field notes. Once lampooned as “organ grinder” monkeys, our appreciation of these monkeys has been elevated by the tireless work of primatologists like Kotrina. Capuchins have a massive brain relative to their diminutive body size. They have been observed making and using stone tools—a behavior once thought to be uniquely human. Like ourselves, the Costa Rican capuchins have their own regional idiosyncrasies. Some groups have been observed playing a pass-the-toy game with leaves and twigs, rolling up noxious caterpillars in leaves before scrubbing them against a branch to make them more palatable, and even poking each other in the eyes in a behavior that may serve as a trust building exercise.

Our students have long punched above their weight. Kotrina is one of many of the success stories to come out of SMC and we hope that she will be an inspiration to our students in attendance today.