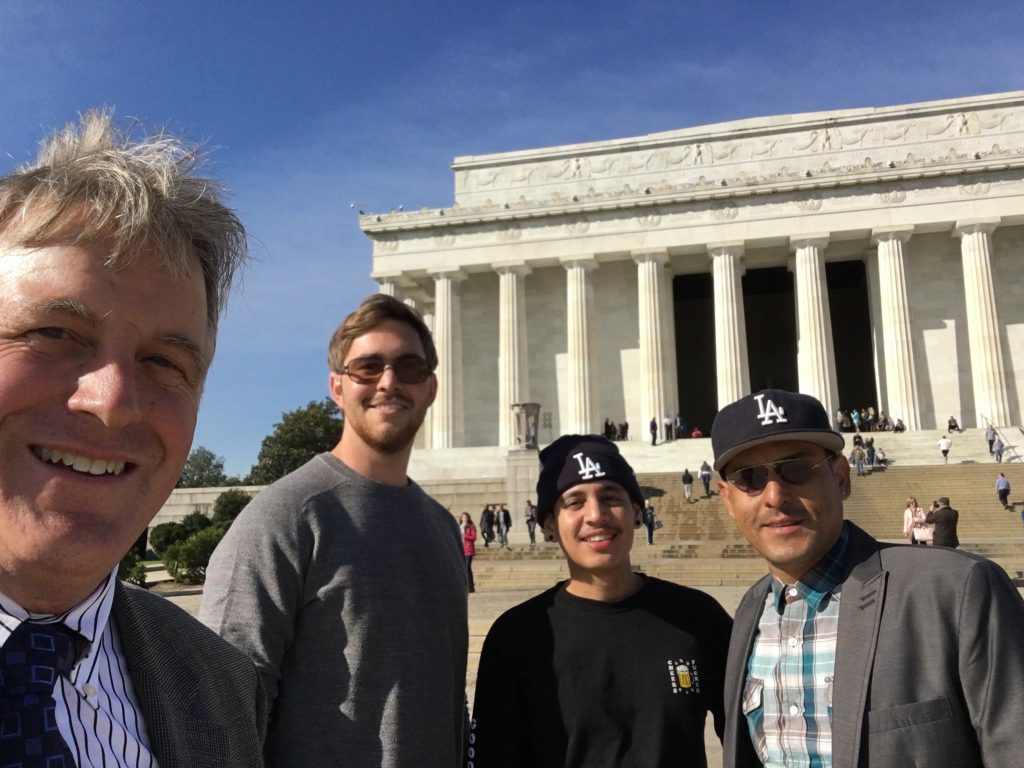 As part of a National Science Foundation grant, “Strengthening Solar Photovoltaics Education,” Stuart Cooley, Professor of Renewable Energies with the Sustainable Technologies Program, was able to fund an entourage of students, faculty, and administrators to Washington DC as part of the NSF Advanced Technology Education (ATE) Principal Investigators (PI) Conference, held at the historic Omni Shoreham hotel in Northwest Washington. For two students, it was a chance to help showcase some science-based training modules, and to meet other students from around the country. And it was their first visit to the Nation’s Capital. Joining Stuart were two of his students, Michael Saldivar and Chris Molina, and a third student, Keelin Spencer, active on the grant as Social Media manager, also attended. Grants Manager Laurie McQuay-Peninger, Career Services Counselor Jenna Gausman, and Physics Professor and co-PI Steve Paik rounded out the SMC contingent.

This grant represents perhaps the first NSF grant ever awarded to Santa Monica College, and was thought to open the doors to future collaboration with the nation’s foremost government authority on the sciences. The NSF set the stage back in 1959 for most research and development to be handled through colleges and universities, helping to ensure against corporate bias in the pursuit of scientific discovery and research.  NSF expanded their reach into community colleges, recognizing the importance of technician training and adoption of technologies furthering the goal of creating technical jobs necessary for technology advancement.

This opened the third year of this three-year grant; students She’Tara Franklin and Diego Johansen attended last year, and this year also saw the introduction of the use of 360-degree virtual reality (VR) pictures and video in the creation of sharable lab and classroom experiences recorded with 360 cameras.

A related project utilizing volunteer students from both Earth Science and the Media Departments will be refurbishing an electric vehicle rescued from retirement from the Facilities Management offices, and turning it into an outreach vehicle (pun intended) to encourage high school students and undeclared SMC students to consider joining the fast-growing employment market that makes up the Sustainability movement, from solar installation jobs, to energy efficiency auditors to zero waste specialists, all of which are skill sets mastered through participation in the Sustainable Technologies Program’ many certificate programs.

Those (faculty and students!) interested in participating in any aspect of these novel projects are encouraged to contact Stuart Cooley at extension 8721 or email at cooley_stuart@smc.edu.